We will use Java, as mentioned before. In order to compile java source code and to run java executables you will have to install the latest version of the Java Development Kit (JDK). The JDK can be downloaded and installed from the official Oracle webite. Other than the development kit you will also need an IDE. I can highly recommend IntelliJ IDEA. Lastly we are also going to use an external library, AsciiPanel, to emulate a console. You will need to import this libary using your IDE's tools.

The finished code for this tutorial can be found here.

To begin the workshop we will build the "Hello world" of game development: a program that displays a game character that we can move around on the screen with keyboard input. In order to do this we will need a game loop that continually queries the user for input and redraws the screen.

We start by creating a package "roguelike" and creating a class called "Roguelike" in it. In this class we define a few variables that will be used in the game loop (isRunning, framesPerSecond, timePerLoop). The player object defined here serves as our game character that we control. The code for this class is shown later in this chapter. We also instantiate a UserInterface object. This is a wrapper class that contains some framework-specific code, so we will not be reviewing it in this workshop. The code for this specific class can be downloaded here.

To receive keyboard input from the player we create a separate function processInput in the roguelike class. This function polls a queue containing keyboard inputs. Depending on the kind of input (up, down, left, right) the function will then try to move the player in the specified direction by one unit.

The above code also needs the following imports at the top of our Roguelike class to work:

Now we have all we need to run our game loop. The game loop is the heart of our game: it takes input from the player, updates the game logic and draws the game to the screen. For now we will only take input from the player and draw the player's character. We start by creating a function called run in the roguelike class. We will call this function in the programs entry point in order to start the game.

A game loop will run uninterrupted until the game stops (or crashes). Depending on the way the game loop receives input from the player we can recognize two types of game loops: blocking and non-blocking. Blocking game loops will wait for player input every loop iteration; this temporarily pauses the game (state). This type of loop is typically used for turn-based games such as Sid meier's CIV games. Non-blocking game loops do not stop to wait for player input; they only check to see if the player has entered any inputs since the last loop iteration. If there are no inputs waiting to be processed the game loop will simply continue running and update the game state. This type of game loop is typically used in games that require continuous updating such as first-person shooters or real-time strategy games.

We want our game to run at the same speed on every kind of hardware. This means that we will have to implement some form of speed limiting. In this case we will limit the game loop to 60 updates per second. Every game update will then take a sixtieth part of a second. To ensure that the game runs at the desired speed we need to make sure that every game loop iteration takes that amount of time; no more, no less. We do this by timing every iteration and then pausing the game loop by the leftover amount of time (timePerLoop - (endTime-startTime)).

We still need to create our Creature class. The class inherits from a superclass called "Entity". This will turn out to be very useful later, when we will have multiple kinds of game objects with common attributes such as items, tiles and creatures. All classes related to game entities will reside in a package called "entities".

Now we can create the Creature class. At this point it only contains functionality to move the character around, but this will change later in the tutorial.

The only thing left to do now is to define the entry point for our program (in the Roguelike class).

The code above creates a new Roguelike instance and starts the game loop. When running the program you should see a screen similar to the image below. You should be able to move the "@" character by using the arrow keys. 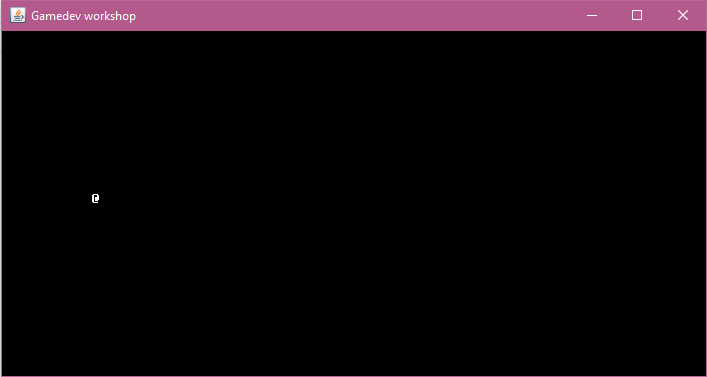 The complete source code for chapter 1 of this workshop can be downloaded here.

Now that we have a character moving around on the screen we can start thinking about the world in which the game takes place. We will represent this world with a single class called World, containing a two-dimensional array of Tile entities and a list of Creatures.

The Tile class inherits from the Entity superclass. It is a simple value class that adds two specific attributes: backgroundColor and blocked. The blocked attribute defines if another entity can move over the tile. Later on we will adapt the move function in the Creature class so the player's character (or other creatures) can't move over blocked tiles.

With the Tile class ready we can now create the World class. This class contains a couple of getters (getTile, getEntityAt), a function to add creatures and a function that checks if a given coordinate is passable (i.e. blocked) or not.

A newly created world object will be practically empty; it does not contain any entities. We need to fill it with tiles and creatures. In order to do this we will create a separate WorldBuilder class (a factory class) that will create and populate a new world and return it.

In our implementation of the WorldBuilder class we add a fill operation, to fill the world with a tile of a specific type. The creation of the Tile objects is done through the createTile function, which takes a tile type and an x- and y-coordinate.

The last operation that we add to the WorldBuilder class is a cave generation algorithm. This algorithm uses a random walk to carve out a path in a world filled with walls. The algorithm starts at a certain point and moves one unit in a random direction, replacing the tile in this location with a ground tile. The resulting path will resemble a "natural" cave, without any sharp edges or straight lines. The algorithm will walk around for a pre-defined amount of steps. Logically, if the amount of steps increases the path that is carved out will become larger.

Now we need to adapt our Roguelike class constructor to create a new world during startup. First of all we add a variable world to contain our new World. Second, we add a function called createWorld that will create our new world and add our player character to it. In this function we create a new world by using a WorldBuilder instance. We perform the fill operation, so that the whole world is filled with wall tiles. After this we carve out a cave using the random walk algorithm. Finally, we add the player character to the world.

Before we can actually try out the improved game we need to change the move function of the Creature class so that a creature can't move over a blocked tile anymore. We add a parameter world to the function. We can then use this parameter to see if a tile is passable by calling world.isBlocked(...), before we actually move the creature. We only move the creature if the tile is passable, of course. Don't forget to add a world argument to the player's move function in the processInput function (roguelike class)!

3. Viewing the world through a camera

The only issue now is that we are moving around in our newly-created world but can't see it. To fix this we need to adapt the drawing code.

The drawing code is ready, now we only need to adapt the Roguelike class to use the new Camera class. We add a camera variable and initialize it in the constructor.

When running the program now you should see a screen similar to the image below. You should be able to move your character over the ground tiles (".") but not over the wall tiles ("#"). The camera should scroll along with your character. 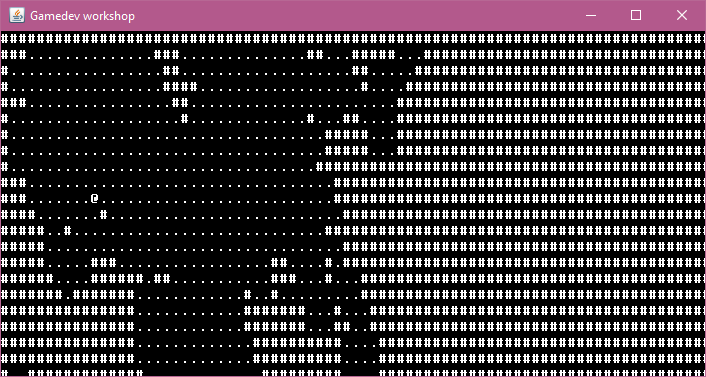 4. Adding monsters and other creatures

Adding these creatures to our world is rather simple. In the WorldBuilder class we add a function createCreature() that will return a new creature (either a zombie or a sheep) with a given position.

We will use this function in another new function called populateWorld. This function will place a given number of entities in the game world in random unoccupied places.

The new creatures can't be killed yet, however. We still need to add hitpoints to the Creature class so that creatures can take damage and can be killed. We also need a boolean called isDead, which we will use later on to determine if the entity can be removed from the game.

To implement creature battling we will add two functions to the Creature class: damage() and attackCreature. The damage function simply subtracts a given amount from the creatures hitpoints.

In the move function of the Creature class we have to make some changes. If the creature moves onto a tile blocked by another creature it will attack this creature. We can implement this by checking if a blocked tile contains another creature. If this is the case, the attackCreature function ill be called with the other creature as the argument.

Creatures can now be killed and attack other creatures, but they still don't move around. They need some form of AI that decides in which direction they will move. We will add an update() function that decides in which direction the creature moves depending on the creature's behaviour. The creature will only move about once every second. This can be done by only updating if a randomly generated number within the range (0, 100) is larger than 60 (the program runs at 60 fps, so this will result in about one movement per second). A docile creature will then move in a random direction. An aggressive creature will look for other creatures within a specific range and chase or attack one of them.

The above function requires a yet to be created function called getCreaturesInArea. This function simply loops through all the creatures in the world and returns those that lie within the specified rectangular area.

If everything went right you should have a game screen similar to the one below. The zombies should chase you if you run past, and the sheep should rnadomly move around. If attacked repeatedly the creatures should die and disappear. 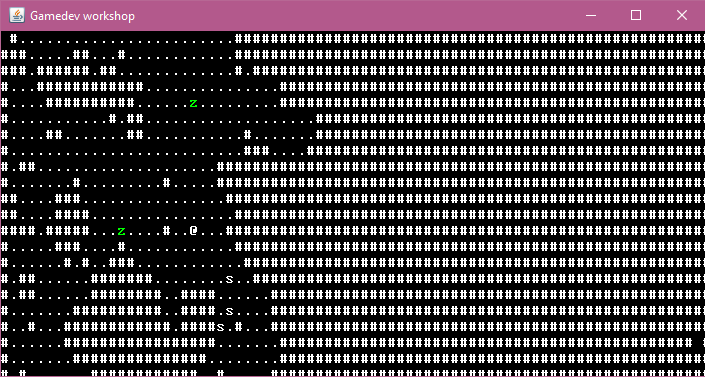