Turning the terminal into a canvas

Many of the original roguelikes used the terminal to render their game world with text characters. Nowadays this is not very common anymore, with many roguelikes opting to use actual graphics libraries over ASCII characters. However, the limits of the terminal have definitely not been reached. In this article I will show how terminal escape sequences and half-block characters can be combined to render sprites and tiles in the terminal. I'll start with the basics, explain each part in detail, and slowly build up to the end result: a rendering method that can show fluent 16-bit graphics in a terminal.

The most basic method of terminal rendering would be to simply print out text, divided into rows by newlines. You then redraw the screen by clearing it (using clear) and printing the whole thing again. Depending on the efficiency of your code and the speed of your terminal this might result in some screen flickering.

Here's an example code snippet in python that contains a function using this rendering method:

The previous method works, but it does not allow for any optimizations. It is impossible to only redraw certain portions of the screen, even a single changed character requires redrawing the screen in its entirety. Also, the only thing we can actually render to the screen this way is white on black unicode characters. That works for really basic roguelikes, but if we want something more colorful we will need to use ANSI escape sequences.

These sequences are interpreted by the terminal and cause it to perform some built-in functions. Some of this functionality enables us to set the cursor position, change the foreground (or background) color and erase the screen.

For purposes of turning the terminal into a canvas we'll need the following escape sequences:

Here's an example typescript/node function that can render colored characters in the terminal using escape sequences:

Now we can draw colored characters to the screen, but we still haven't made use of the other huge improvement that the escape sequences make possible: efficient updating of the terminal screen. With the escape sequence to set the position of the cursor we can choose to only redraw certain regions of the screen, where needed.

A small note here: we could also just keep two buffers (2d arrays), one to store the screen state and one to store the a temporary buffer to be used as a "staging area". When drawing a new frame we would just loop over the 2d buffers and compare each item, performing a draw-op if there is a difference. This approach is less efficient however, since in this case we have a time complexity of Θ(n), n being equal to the width of the buffer times the height. When using a queue to store the draw ops we have a best case scenario of Ω(0), and a worst case scenario of O(n).

Turning the terminal into a canvas

There are two block elements, the half block characters ("▀" and "▄"), that allow us to use the terminal as an actual canvas, with pixels that can be set individually. If we were to look at the terminal, and looked at each cell as a pixel, then we would have a canvas with a very small resolution (80x24). That alone is not enough to actually render anything useful. Such a canvas could contain about one and a half 16 bit tile sprites vertically, or three 8bit sprites. Again, not enough to actually do anything useful with. However, with the half block characters, we can actually double the vertical resolution. Those characters allow us to divide a cell into two vertically, by making smart use of foreground and background colors. Now with a default sized terminal of 80 by 24 cells, we can create a canvas with a resolution of 80 by 48. In terms of 16-bit tiles, that's a canvas of 5 by 3 tiles, which - while still very small - is actually useful.

Below you can see what such a 3 by 5 tile canvas looks like in a terminal (the tiles were taken from pokemon Leaf Green): 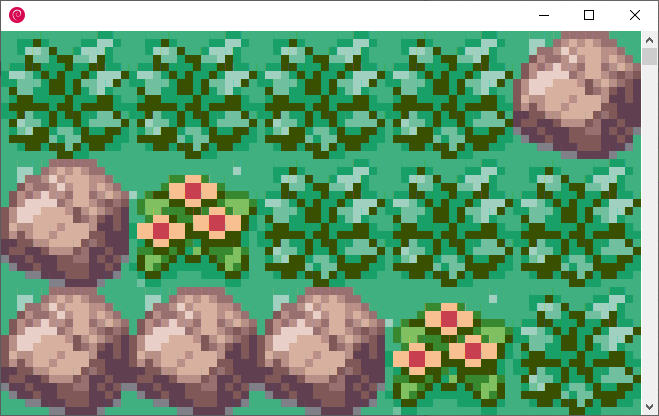 Here's an example of such an abstraction: